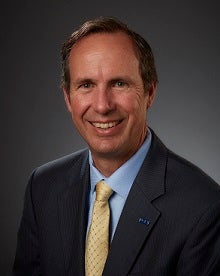 Prior to arriving at UCLA, Mr. Beck served as the City Manager for the City of Pasadena (2008-16) with responsibility for the overall operation of the city’s government and an annual operating budget of approximately $685 million. Additionally, Mr. Beck has served as assistant city manager (2004-08) and deputy city manager (2001-04) for the City of Riverside. Mr. Beck also worked in various capacities at UC Riverside, where he earned a BA in business economics as well as an MBA.

Mr. Beck isn't the only UC grad in his family—his wife, Brigid, and all four of their sons attended UC campuses. Their eldest graduated from UCLA, second-born from UC Davis and the twins will soon graduate from UC Berkeley.