Bruins rewarded for walking their wheels 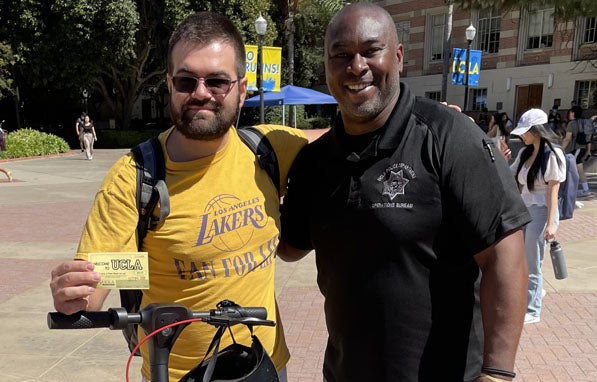 UCPD was out on patrol during the first two weeks of the school year handing out a different kind of ticket than usual. Bruins who observed the dismount zone at Bruin Plaza by walking their scooter, bike or skateboard were rewarded with an ASUCLA meal voucher during a special campaign welcoming students back to campus.

Transportation worked with UCPD to obtain the vouchers and print holders for them that included a thank you message for observing the dismount zone.

“We wanted to show our appreciation to them for following the rules, and give out meal tickets over real tickets,” said Crime Prevention and Community Engagement Officer London McBride. “Everyone had some level of apprehension when I approached them, but when I handed them the voucher, they were extremely grateful and engaged in conversation with me.”

In addition to Bruin Plaza, Bruin Walk and the Parking Structure 8 corridor are designated dismount zones where all wheeled devices must be dismounted and walked through the area for the safety of pedestrians.

This partnership with UCPD amplifies Transportation’s efforts to promote dismount zone compliance this fall, including new signage and stenciling indicating where a dismount zone begins, and a campus-wide BruinPost distributed on the first day of instruction.